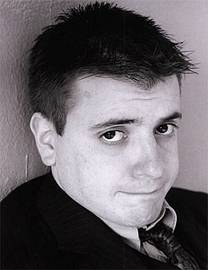 Danny Buckler is fast establishing himself as one of the most popular
performers in showbiz with a unique style that combines stand-up comedy, improvisation, story-telling, audience participation and the odd bit of magic.

The past few years has seen Danny travel the world entertaining the troops in Bosnia, Belfast, The Falkland Islands and Diego Garcia. He was also invited to support Victoria Wood on her national tour, which led to Danny being asked to participate in the show 'Victoria Wood and Friends' at the swanky Adelphi Theatre alongside Victoria and Imelda Staunton.

Danny is a much sought after TV warm-up artist, having worked on various shows including the BBC series 'Dead Ringers' and 'Dinner Ladies' among others.

"It's time we saw him on TV" LBC RADIO

When can I see Danny Buckler?