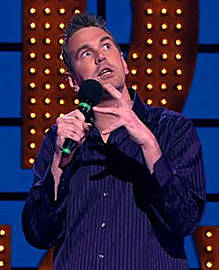 "The Prodigy" - The Independent

In a short time, a passionate work ethic of tireless writing and gigging has made Chortle Award nominee and BBC New Comedy Award Finalist, Steve Williams, one of the most exciting and electrifying live performers of the new comedy generation.

Steve never fails to surprise and engage audiences with his hybrid of bizarre stories, larger than life physicality, spontaneous improvisation and his off-the-wall take on everyday life.

Steves TV credits include appearances on Essential Edinburgh, BBC2s TV coverage of the Edinburgh Festival, Children of Courage Awards broadcast on ITV1 and the Richard and Judy Show on Channel Four.

Steve appeared in The Comedy Zone in Edinburgh 2004.

"A treat to behold. His inventive material and banter with the audience blended together effortlessly and seamlessly." Manchester Evening News

When can I see Steve Williams?