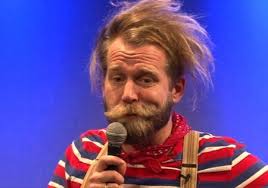 Canadian Law is a top-notch comic who marries a powerful delivery with some deceptively ingenious material. His finest lines demonstrate inventive comic thinking, although it's an intelligence he wears lightly, with no hint of a 'look at me, aren't I clever?' attitude.In fact his jokey, crowd-pleasing manner easily commands an audience, while hitting them with gags much smarter than they have the right to expect.

Canadian comic Tony Law began his stand up career in the UK after winning The 1995 New Act Competition at the Glastonbury Festival. Since then he has firmly established himself as a regular stand-up on the Uk`s comedy circuit with performances at The Comedy Store, Jongleurs and Up the Creek. Tony has started to build an international name for himself, with performances in The Netherlands, Ireland, Canada and South Africa.

August 1999 saw Tony starring in the sell-out Comedy Zone at The Edinburgh Festival. He then went on to perform across the country.

When can I see Tony Law?