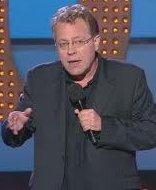 Award winning comedian, MIKE WILMOT started life as stand-up in 1995. Since then hes become very popular in the UK and Ireland performing on the comedy circuit over here since 1998, and at the Edinburgh Festival  to great critical acclaim.

Mikes effortlessly funny style is a fast-paced, hard-hitting comedic look at everyday life. His comedy targets vary widely, from diets, kids and sex - to American-Canadian backbiting and his fondness for beer. On stage he times himself by how many pints hes had, rather than having to look at his watch. A proud cynic, Mike is politically and anatomically incorrect, but with a passing resemblance to Oliver Reed he is completely engaging.

"The bear-like, gravel voiced Mile Wilmot fires keen reports from the front line of the sex wars. He sweats; he shambles; he swears. Youll cough, choke and chortle" -The Glasgow Herald

He has also appeared numerous times at the prestigious Just For Laughs Comedy Festival in Montreal. Mike has been in several feature films, some of which will be shown in UK cinemas later this year.

Mike has performed at every major UK venue, as well as in Ireland, Scandinavia, Paris, Amsterdam, Hong Kong, Bangkok and South Africa.

"Like any fine comedian, he exudes intelligence and sweat in equal measures, Wilmot can give any other stand-up alive lessons in the power of laughter to free us from the shackles of embarrassment" -Time Out

When can I see Mike Wilmot?