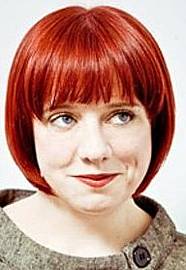 Angela Barnes has been performing stand-up regularly since September 2009

After running and promoting the popular Funny Farm and Funnier Farm nights in Brighton for 2 years, Angela Barnes is now forging her way as an exciting new act on the circuit.

She was booked to play Comic Boom at Komedia, Brighton in her first 4 months of performing, and gigs regularly for Laughing Horse in London and Brighton and Lonestar Comedy in Kent amongst others.

"Surprising amount of confidence for such a new act. Solid set with the potential to go far" Corry Shaw, Foolhardy Comedy

"easily the most comfortable on stage, with the best jokes and delivery" Fringe Guru

"This is a lady who is confident in the way she attacks her one liners and punch lines, her easy going manner really drew the audience in" Fringe Review

When can I see Angela Barnes?