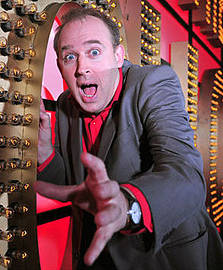 BBC1'S 'LIVE AT THE APOLLO'

Tim is well known on the comedy circuit for having more punch lines per minute than any other comedian. At full pelt Tim sprays out 10 jokes a minute. The Sunday Times described him as "blissfully hilarious" and The Guardian enjoyed "an inspired medley of out-to-lunch one-liners".

Tim is also no stranger to television and can be seen at the moment on our screens in the second series of 'The Sketch Show' (ITV1) The first series recently won a BAFTA award for best comedy show.

The show has been sold around the world where it has enjoyed enormous success.

His other credits include 'Royal Variety Performance' (BBC1), and 'The Comedy Store' (Channel 5). He has also been the host of "Fluke" (Channel 4 short listed for Montreux Golden Globe Award), 'Whittle' for Channel 5, 'Housemates' (BBC 1) and as well as his own show 'The Tim Vine Christmas Present' (Channel 5). Tim was also the first man to appear on Channel 5 co-hosting the first show they broadcast called 'This is Five' and guest host on 'Not the Jack Docherty Show' (Ch5).

At home in stand-up, Tim always sells out at the Edinburgh Festival and for last years "I'm Vine Thanks", he received rave reviews. Scotland on Sunday said "he's magnificent and like no-one else in Edinburgh".

Tim received critical acclaim for his performances at the Montreal 'Just for Laughs' comedy festival and also won the 'Best Newcomer' Perrier Award in 1995.

"The man with the golden pun" - THE INDEPENDENT

"One big irrepressible roller-coaster of mirth" - THE STAGE

"Bursting with exuberance and unexpected Panache" - THE TIMES

"The King of Idiots" - THE TIMES

"Tim has taken the trick of word-play and extended it to lengths no other comedian has ever dared before. A very funny man indeed" - BOB MONKHOUSE

When can I see Tim Vine?