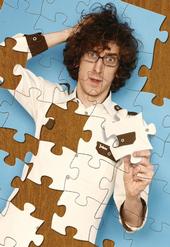 Hailing from Sheffield, with a fine comedy name, Tom Wrigglesworth started his ascent up the comedy ladder in 2002 and has steadily earned a reputation as an exciting and promising newcomer on the British comedy circuit.

In 2003, he scooped first prize at the prestigious Channel 4 'So You Think You're Funny?' competition; an award previously won by stand up luminaries including Dylan Moran, Peter Kay, Rhona Cameron and Tommy Tiernan. In 2004, Tom was recognised once more by the Comedy industry receiving a nomination for the Chortle 'Best Newcomer'. Tom was delighted to have gained recognition so early in his career from the most comprehensive, critical and up-to-date guide to comedy in Britain. He threatened to go professional if things continued to go well and in 2005 he took the plunge and left the day job.

Since then, the lanky Yorkshireman has continued to take the UK circuit by storm, wooing audiences far and wide with his gangly presence and confident and assured delivery. He has a winning combination of an impossibly likeable persona and a catalogue of first class material. His set is littered with stylish one-liners and twisted tales which reveal an inherently dark humour. A natural performer, Tom possesses an innate and skilful ability to riff with any audience like they are old friends; instantly establishing a winning rapport and making it all appear simply effortless.

Tom is currently working for The Comedy Store, Jongleurs, Off the Kerb, The Comedy Café, Up the Creek, Banana Cabaret and many other major comedy clubs around the UK. A master of spontaneity, he is ideally suited as a compere and equally comfortable performing full sets. An inherently funny guy and a superb newcomer who through hard work and commitment has built a reputation as a dynamic live performer and certainly one to keep an eye on!

He is currently working on material for his eagerly awaited debut Edinburgh performance in 2006. Watch this space!

'With such an impressive stage presence, and equally impressive writing, Wrigglesworth's is a name to keep an eye on' - chortle

'Destined for the dizzy heights' - NME

'The ultimate crowd pleaser' - The Guardian

When can I see Tom Wrigglesworth?