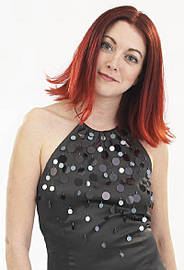 This bad assed Black Country lass takes no prisoners with her irreverent, close to the knuckle and honest humour. She'll have you laughing well into the next millennium with her razor sharp cynicism.

Winner of the first ever Jongelurs Competition and a seasoned regular on the circuit, Susan has emerged as one of the best female stand-ups around. Susan is working nationally; Comedy Store, Jongleurs, Up The Creek, Banana Cabaret, Lee Hurst's Backyard, Comedy CafÃ© and internationally; Quatar, Dubai, Abu Dabi, China, Indonesia, Germany. Her versatility means that as well as Corporates and TV warm up, Susan has handled Biker Festivals, music festivals inc. Glastonbury. After her sell out Edinburgh show in 2004 "Happy Hour" she is writing and performing for Radio 1 on The Milk Run and has just received a writing bursary from the BBC and is writing several projects for them. She is also working on projects for Steve Coogan's production company Baby Cow. Susan starred in the TV comedy drama "Love, Lies and Lipstick" for Carlton West. She also performed in Screaming Blue Murder's "Big Value Comedy Show" in Edinburgh in 2000.
Her comedy talents don't stop there; Susan performed in two Arthur Smith Edinburgh shows one of which was extended to the West End ; "Arthur Smith Sings Leonard Cohen".

She has also been in three seasons of The Comedy Rep at the Soho Theatre performing monologues, sketches and sitcoms.
And to top it all she also dabbles in street theatre for Dot Comedy and Swank.

.
"She has the mentality of a spiteful 14 yr old boy! Very admirable in a young lady!" Arthur Smith

"I like her jokes so much, I'm doing them now!" Scott Capurro

"A right cheeky little lass who oscillates brilliantly and wildly between characters, accents, stories and banging the mike on her head" Three Weeks

When can I see Susan Murray?