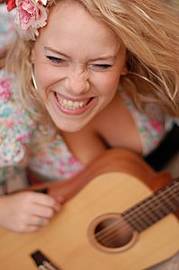 From BBC1's 'The Rob Brydon Show'

Carly Smallman sings funny songs. She was born in 1985, but didnât begin performing stand-up comedy until 2009. Her unique blend of outrageous impropriety and adorable sincerity has established her as a firm favourite in London clubs and beyond. She has played at some fabulous venues, including Banana Cabaret, The Covent Garden Comedy Club, Spank, Amused Moose Soho, and Comedy Camp. In 2010 she was first runner up in the Bedford New Comedian of the Year competition, and a Laughing Horse semi-finalist. In 2009 she was an Amused Moose Hot Starlet, and was also shortlisted for the final of the Musical Comedy Awards. Recently, Carly appeared on THE ROB BRYDON SHOW (BBC2), and is soon to be seen criticising people who are more famous than herself on THE TOP FIFTY PLASTIC SURGERY SCHOCKERS (E4). Carly is also one half of double act âYOUâRE NOT THE ONEâ, with Luisa Omielan. Their 2010 Edinburgh show, âA Guide to Love and Datingâ was a complete sell outâ¦if you can call a free show a sell-out. Basically, no more people could fit into the venue.

Carly has also enjoyed tremendous success as an improviser, and was one of the original cast members of fringe smash, Scenes From Communal Living: **** (British Theatre Guide). âVery funny, fresh and endlessly creative.â (Time Out). âLondonâs hottest young comedy improvisersâ (Fringe Review). She has trained with Keith Johnstone and Alan Marriott, and she sometimes likes to create off the cuff ditties as a surprise part of her comedy set. Other improvised shows have included Scared Scriptless: The Improvised Horror Movie, My Show my Rules, and Abandoâman in which she enjoyed collaborating with fellow comedian/improviser Rob Broderick to create improvised folk-hop anthems.

Carly has also worked in theatre direction, with credits including: The Tempest, The Florists, Fugue State, Grimm Tales, War and Feet, and Girl, Youâll be a Woman Soon which she worked on in association with the Millennium Forum Theatre in Derry. She has appeared from time to time on ONFMâs âThe Football Showâ.

Carly got a 2.1 in her degree. It was in Classical Civilisation. She currently lives in Beckenham.

When can I see Carly Smallman?