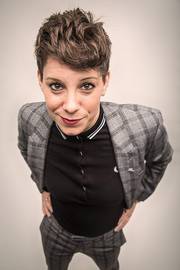 'Who is the lead singer of Morrissey?'

Suzi Ruffell wants to be coolâ¦ she suspects she isnât and she wants to talk about it.

Since bursting onto the comedy circuit in December 2008 Suzi has performed at some of the most established clubs in London including Banana cabaret, The comedy cafe, The Comedy Store, Headliners, The Royal Vauxhall Tavern and Komedia (Brighton). Most notably she was the only newcomer asked to perform at Banana Cabaret's 25th anniversary show alongside a whole host of comedy heavyweights including Mark Thomas, Milton Jones and Terry Alderton, her performance subsequently earned her a 20 minute spot at the prestigious club. She is also a regular MC for Laughter room @ The Furzedown, The Hideaway, Comedy Stop Balham and Mirth control.


'The best thing to come out of Portsmouth since Charles Dickens'

When can I see Suzi Ruffell?