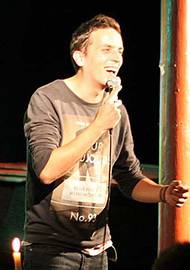 Ross is becoming one of the fastest rising stars on the circuit so far, having beaten the infamous Gong at the Comedy Store on his first attempt, coming 2nd in the Comedy Cafe's new act night, supporting industry heavyweights such as Jo Brand, Sean Walsh, Bob Mills and Patrick Monohan and recently has been booked as official tour support for Russell Kane


He's been lucky enough to perform several times at some of the countries most prestigious venues, including Komedia, Backyard, Frog & Bucket and Outside The Box, sharing the stage with the likes of Jon Richardson, Ian Stone, Lee Mack & more. Ross has gigged all over the UK as well as abroad at various shows in the Middle East, compering, opening and headlining.

When can I see Ross McGrane?