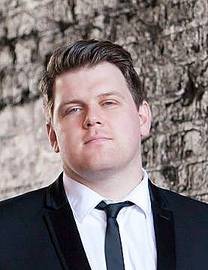 Ash Frith started gigging in 2011 and has enjoyed performing with some of the best acts on the UK comedy circuit ever since,

Ash has enjoyed a great 2013 providing support for Russell Kane and Terry Alderton on theatre dates, as well as performing in further flung locations Middle spots at Frog and Bucket (Manchester) and Comedy Central (Liverpool) and is booked at XS Malarky (Manchester) in the new year

Ash Performed in the West End Show "Cornucopia" the extravaganza hosted by The Boy With Tape on His Face, and was resident MC for a month of shows at Londons Outside the Box comedy club performing with huge names from the UK circuit including Omid Djalili, Andrew Lawrence and Jarred Christmas.

2014 will see Ashs 1st solo show "Due to Foreseen Circumstances" debut in his home town of Southend with various fringe shows booked throughout the year.

"I was Frithing at the mouth at his brilliance!" - Russell Kane

"I was lucky enough to have Ash to support me...Stupid me forgetting how pissing good he is!!!!" - Terry Alderton

When can I see Ash Frith?